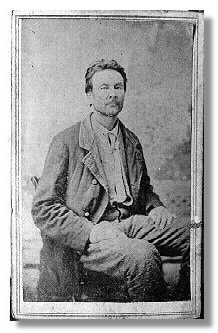 Champ Ferguson: Hero & Martyr, or Something Else?

Champ Ferguson, a legendary Confederate partisan ranger and guerrilla fighter, was easily the most notorious among the many such men who fought to control the Upper Cumberland Plateau region along the Tennessee and Kentucky borders. Nominally holding the rank of Captain in the Confederate Army, Ferguson led his own company of independent cavalry. When not making the most of every opportunity to harass and intimidate Unionists in the area, Ferguson acted as a scout for Genl. John Hunt Morgan, and was for a time attached to the command of Genl. Joseph Wheeler. His company was under Wheeler's command when they took part in the Battle of Saltville (Virginia).

At war's end, Ferguson and his men returned to their homes and, on 23 May, 1865, they were induced by promise of the same parole given to the officers and men of Lee's and Johnston's Confederate Armies to surrender themselves to federal military authorities. All except Ferguson were indeed released on Oath. Champ Ferguson himself was summarily arrested, and charged with over 50 counts of murder. Some of his purported victims remained nameless, and many of the other charges were wholly unsupported by either witnesses or documentation. In a trial at Nashville, lasting from 11 July through 26 September, 1865, a military tribunal called witness after unreliable witness against Ferguson, all the while denying his counsel every opportunity to present a competent case in his defense. On 10 October, General Orders affirming his conviction and sentencing him to death by hanging were issued. On Friday, 20 October, 1865, the Order of Execution was carried out while Ferguson's wife Martha and sixteen year old daughter Ann watched. Thus it came to be that Champ Ferguson joined Henry Wirz, Commandant of the Confederate prison at Camp Sumter (Andersonville) as the only two former Confederate's of any rank or position to be executed for supposed "war crimes."

The following text is from an "Afterword" to the Ferguson biography mentioned below, and was writen by the son of the author:

"I thought I'd found Champ back in 1941 when my father and I went looking for him in that old graveyard on the Calfkiller River. Maybe I was wrong. According to a story I read in the Cookeville Herald-Citizen, there was a conspiracy between Champ and the military. The theory is that the military felt that Champ should not be hanged because many others as guilty as he had been paroled. The story is that the military enclosed the undersection of the scaffold and that a ring of soldiers completely encircled it. When the hangman cut the rope and Champ dropped through the trap door, they quickly untied the loose knot and placed Champ in the casket alive. The casket was then placed on a waiting wagon which Champ's wife and daughter drove out of town. When they were out of Nashville, Champ climbed out of the casket and the three rode all the way to Indian Territory in Oklahoma, where they took new names and took up farming and ranching for a living."

"It's an interesting story. But if it's true, who is buried in the grave I found marked "Capt. C. Furguson"? Are we to assume that his wife Martha didn't know how to spell his name? Or that someone else in on the conspiracy misspelled it and put up a stab of limestone at a fake grave so that everybody would think Champ had really been hanged? What did Colonel Shafter whisper to Champ in a low undertone that made Champ's face light up noticeably? Did he tell him about the conspiracy and that he would be saved by the military?"

We'll never know, and the legend lives on...

The photographs reproduced above, both believed to be previously unpublished, were taken at the same sitting by Nashville photographer C. C. Hughes, whose studios were on Church Street. It is unknown whether these images were taken there, or whether Hughes came to the prison where Ferguson was held. At least four images from this session have survived in the form of Cartes de Vistes (CDVs). One of the three was reproduced in the book Champ Ferguson, Confederate Guerilla by Thurman Sensing, originally published in 1942 and currently in print from Vanderbilt University Press, to which reference is here made for a complete biography of Ferguson and accounts of war time activities and subsequent trial. Of the remaining three, two appear on this page and the third (scanned from a 67 year old newspaper article) appears on the Muster Roll of Capt. Champ Ferguson's Independent Cavalry Company page.

Even though the war had been essentially over for five months, the Yankee press still felt the need to propagandize, and to slander the defeated Confederacy and the men who fought for her. This was especially true when it came to Confederate partisan fighters. The following quotes, full of distortions, half truths, and outright lies about Champ Ferguson, are taken from Harper's Weekly.

"Among the guerillas who infested Kentucky during the war Champ Ferguson and his men were the most notorious. Their outrages were chiefly confined to Wayne and Clinton Counties. Champ Ferguson himself is quite a character, though the bloodiest of rascals and murderers. His religious notions are, to say the least, rather queer. Whether he takes a hint from Theodore Parker, who used to call God "Our Father and Mother" is uncertain, but Champ is in the habit of speaking of the Father of All as "the Old Man." He, in a recent interview with the editor of a Western paper, expressed his opinion that "the Old Man" had been on his side thus far in life, and he believed he would stay with him and bring him out of his present trouble all right. He thought the Campbellites were about as good as any of the religious denominations, and a little better."

"Champ Ferguson is now being tried at Nashville by a court-martial on the charge of committing murders and other acts in violation of the laws of war. The verdict has not yet been given, but there is no doubt that he will be punished with death for his many atrocities. Before the war he was arrested for the murder of Read, the constable, and confined in jail. At the outbreak of the rebellion he was released on his pledge to join the rebels. He claims that he had been previously a Union man. He then commenced his career of murder and robbery which made his name a terror in Kentucky. He acted under the orders of John Morgan in most of his raids in Kentucky and Tennessee. He surrendered at the close of the war, supposing that he would be let off with the oath of allegiance. Champ owns a considerable amount of land in Clinton County, Kentucky, estimated by the hundreds of acres. He has good reason for the wish, which he now expresses, "that there had never been any war."

As a companion to above quoted text, this issue of Harper's also reproduced and engraving taken after the Hughes photograph of Ferguson and his guards (which appears at the top of this page). This illustration is every bit as distorted as the text it accompanies, and between the two the hapless reader of Harper's was certainly convinced that Champ Ferguson was evil incarnate.

Champ Ferguson, the notorious guerilla, suffered the death penalty on the 20th of October. The emotions excited by the career and final fate of this man are those of mingled pity and horror -- pity for the brutal wretch himself, and horror on account of the revelation which his life affords as to the possibilites of human cruelty. The wounded, the sick, the aged, and even helpless childhood, were not spared from his brutal murders.

Up to within a short period before his execution he was as profane and reckless as ever before. "He appeared," says a Western paper, "as braced against every feeling of humanity, as when, with his own hand, he murdered the venerable old man who had cradled him on his knee, and to whom he was indebted for a thousand favors."

Efforts were made, and with some success, to extract from Ferguson the details of his career. He claims to have been a Union man up to the battle of Bull Run. His brother James then joined the Federals, and he the Confederates. The former was killed in battle. He thought, he says, that he was engaged in legitimate warfare. "We were having a sort of miscellaneous war up there, through Fentress County, Tennessee, and Clinton County, Kentucky, and all through that region. Every man was in danger of his life; if I hadn't killed my neighbor he would have killed me. Each of us had from twnety to fifty proscribed enemies, and it was regarded as legitimate to kill them at any time, at any place, under any circumstances, even if they were wounded or on a sick-bed."

Ferguson admitted the truth of nearly all the specific charges made against him. In most cases he claimed that those murdered would have killed him at sight if he had not disposed of them. He looked upon his approaching and violent end with great coolness. He was nearly fourty-four years old. His wife and daughter were with him the day before his execution. They were very much affected at parting with him, but he preserved his usual coolness up to the last moment.

Champ was very anxious that his body should not be given to the doctors to be cut up; in fact, this was the burden of his speech on the scaffold."

The Hanging of Champ Ferguson, as sketched for Harper's Weekly