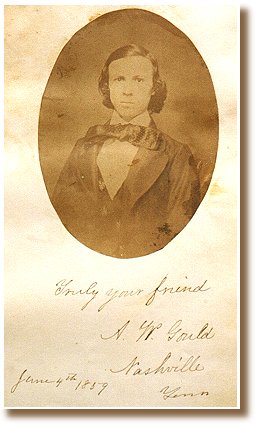 "No Damned Man Kills Me and Lives!"
The Forrest - Gould Affair

Nathan Bedford Forrest was noted for his hot temper and he was in a foul mood when he found that Colonel Abel Streight's Yankee Raiders had captured two of his cannon in an ambush.  He personally blamed Lieutenant Andrew Wills Gould for cowardice in losing the guns even though it had actually been no failure on the part of the young artilleryman. The bushwackers had killed the horses pulling the guns and the guns could not have been brought out.  Forrest was just as angry at being successfully surprised by the Federals and young Gould bore the brunt of his anger.

The Confederates still managed to catch the Union column outside of Gadsden, Alabama, capturing the lot but upon returning to their base of operations in Columbia, Tennessee, Forrest's anger toward Gould had not abated.  He signed orders to have Gould transferred out of his command.   Gould took this to be a mortal insult and went straight to Forrest's Headquarters at the Masonic Building in downtown Columbia to confront the General.

Andrew Wills Gould [ whose image and signature appear at right on a page from a classmate's autograph album ] was a handsome young man who had graduated from Cumberland University in 1861 with high honors.   He had cast his lot with the Confederates at the beginning of the war and had fought with gallantry in each action.  The unfortunate loss of both his cannon in Alabama can only be attributed to bad luck as one of his superiors described him in this way, "I never knew or heard aught to his prejudice; he was a courteous and refined gentleman of temperate and moral habits."

Wills Gould was furious when he received the order of transfer and went straight to General Forrest at his headquarters. The General stepped out into the hallway to speak with the young Lieutenant and the conversation quickly became heated.  Neither Forrest or Gould would relent in their assertions when, according to Forrest, Wills Gould said "no man can accuse me of cowardice and both of us live!"  Forrest, according to eyewitnesses, apparently believed Gould was about to attack him and he took a penknife from his pocket while Gould wrestled with a pistol in the pocket of his linen duster.   Forrest, realizing his jeopardy, lunged at Gould, opening the penknife with his teeth.  Gould, failing to get the gun from his pocket, fired anyway, hitting Forrest in the left abdominal area.  Forrest grimaced but came on as Gould freed the gun from his pocket.  Forrest grabbed the gun hand and forced it up while he plunged the long, slender blade into Gould's left side.  The look on Gould's face told the General that the blade had run true.

Both men staggered back away from each other and Gould ran drunkenly from the front door of the building and out onto the sidewalk.  He crossed the street knowing that his wound was grievous.   As he crossed the street Doctors Ridley and Wilkes, who had been treating Confederate wounded at a nearby hospital, rounded the corner on the court square.  They saw the man stumbling across the street and heard the quartermaster shout for someone to "Stop that man! - he has shot General Forrest!"

Doctor Ridley looked in disbelief.   He recognized Gould instantly as he was blood kin to the boy.  Gould was quickly taken into a nearby tailor shop and laid on the big cutting table.   Doctor Ridley found the wound.  It was gushing a plume of blood with each heartbeat.   Dr.Wilkes put two fingers over the wound in an attempt to stop the flow of blood while Dr. Ridley hurried back to the hospital for the equipment needed to help the rapidly weakening Gould.

General Forrest stumbled back into the quartermaster's office to look at his wound.   He was hit in the abdomen, which during the period of the Civil War was almost always ultimately fatal.   You might linger for several days but any puncture of the abdomen meant a guaranteed case of peritonitis would set in, especially in warm weather.  Men who were hit in this way knew that they were going to die.

Forrest's self~examination showed this kind of wound.  He rose from the chair and bellowed, "Get out of my way!  I am mortally wounded and will kill the man who has shot me!"  The General, his clothing in disarray hobbled into the street and took two pistols from his gaping troopers, heading for the crowd that had gathered at the tailor shop.  Forrest struggled up the front steps of the building, waving the pistols and shouting, "Lookout! Lookout!"  The crowd dropped to the floor at the sight of the furious, gun~waving General.  Even Doctor Wilkes jumped out of the way.   Gould was fading fast but he saw Forrest come in the door and he rolled off the table and went out the back as Forrest sent a bullet after him.  The bullet hit a brick wall and ricocheted into the leg of a gawking soldier.  Gould, now at the edge of consciousness, retreated only a short way before he fainted from the loss of blood and fell into the high weeds behind the row of buildings.   Forrest staggered up to him and pushed at him with the toe of his boot, realizing that Gould was done for.

Doctor Ridley had returned and Forrest ordered up a carriage and ordered the two Doctors to accompany him to the home of his friend, Major William Galloway, where it was his habit to board when in the area.   Forrest was in a foul humor and was spewing strings of epithets while everyone else was extremely ill at ease.  It had only been a little over a month since another of the South's Cavalry Generals, Earl Van Dorn, had been murdered by a jealous husband just up the road in Spring Hill.   Now it looked as if Wills Gould had done to Forrest what the Union Army had not been able to do.  Everyone feared that Nathan Bedford Forrest was a dead man!

On arrival at the Galloway house on West Ninth Street, Forrest curbed his tongue a bit, being in the presence of liadies, but his anger still boiled over.  The Doctors finally got a good look at Ithe wound.  The ball had entered the abdomen, sure enough, but it had glanced off the ileum and passed into the "glutil" muscles of the left hip.  Doctors, breathing a collective sigh of relief, told the General that his wound was not serious after all ~ in fact, it was little more than a flesh wound!

Forrest's whole demeaner instantly changed.  The Doctors offered to cut the bullet out, then and there, but Forrest refused saying, "No, it is nothing but a damned little pistol ball - let it alone!"   He then thought of Wills Gould, dying in the weeds.   He ordered the Doctors to take Gould to the Nelson House Hotel and to spare no expense in saving the boy' life.  Forrest told them he would pay for everything.  There are conflicting stories about whether Forrest was personally reconciled with Gould but it is known that Forrest was bitterly sorry for his actions.  He recognized, at last, that Gould was indeed a brave man and that he had wrongly accused him.

Gould lingered for almost two weeks but, as feared, he died in his bed at the Nelson House on June 26, 1863.   He was 23 years old.  Forrest healed and was quickly back in the saddle.   His Cavalry left the area about a month later and did not return to Columbia until Hood's Invasion of Tennessee in 1864 where they played a major part.