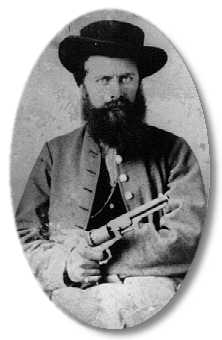 Born in 1842 in Richland (now Portland), Tennessee just below the Kentucky border, Ellis Harper (pictured at right) was just 19 years old when he enlisted in the 30th Tennessee Infantry, Co. "I" at Tyree Springs on November 22, 1861. Private Harper and the 30th were ordered to garrison duty at Fort Donelson on the Cumberland River and when that fort fell on February 16, 1862 he found himself among the thousands of captured enlisted men sent to the prison at Camp Butler, Springfield, Illinois. Harper's name appears on the prisoner rolls, which cryptically note his escape, "date unknown".

After making his way home, Harper came in contact with Captain C. A. Petticord and his company of scouts. Petticord's company had been detailed by Col. John Hunt Morgan ( then operating in the vicinity of Carthage, Tennessee ) to cross the Cumberland River and tear up the Louisville & Nashville Railroad and to procure what he could in the way of munitions and supplies from captured trains and other Federal supply stations. He was also to bring out any recruits he could find. Harper and several others returned with Captain Petticord's company and reported to Colonel Morgan, who formally mustered them in and then sent the company back out on their second raid. On either this or a subsequent raid Petticord and most of him men were captured. Ellis Harper and a handful of others, making their escape, returned to Morgan's command. Taking note of his knowledge of the country and his native shrewdness and grasp of military tactics, Colonel Morgan authorized Harper to recruit a company of men on or near the line of the Louisville & Nashville, and procured for him a commission as Captain.

Captain Ellis Harper's Partisan Raiders did their work with a vengeance -- derailing and attacking trains, burning bridges and water tanks, and attacking Federal forage and supply details wherever they could be found. Before long, the mere mention of the name "Ellis Harper" struck fear into the hearts of both the occupying Federal forces and the local population of "Lincolnites" in Northern Middle Tennessee and Southern Kentucky.

On May 9, 1865, Harper and 24 of his men rode in and surrendered to a detachment of the 11th Minnesota Infantry near Gallatin, Tennessee, and were paroled to return to their homes.

Less than two weeks then passed before Harper learned that fellow partisan Captain Champ Ferguson had been seized at his home only three days after receiving his own parole and had been imprisoned at Nashville, awaiting trial on charges of treason. A few weeks after hearing of Ferguson's arrest, he also learned that the Kentucky partisan "Sue" Mundy had been hanged before a crowd of 12, 000 onlookers in Louisville.No fool, Harper shortly thereafter disappeared, making himself scarce for the next five years. Only after obtaining special pardons from the governors of both Tennessee and Kentucky did he return home.

Ellis Harper then moved to Lebanon, in Wilson County, Tennessee, where he married into a prominent family and resided until his untimely death. On June 25, 1908, he was shot and killed by a much younger man after a heated political argument related to the Carmack - Patterson election.

In his eulogy to Harper, Colonel Baxter Smith ( formerly of the 4th Tennessee Cavalry, C.S.A. ) said "He was a man of strong likes and dislikes and quick to resent an insult for whoever offended him was sure to bring a fight upon himself. He could never forget an injury, but he was a staunch friend to those so fortunate as to gain his esteem..."