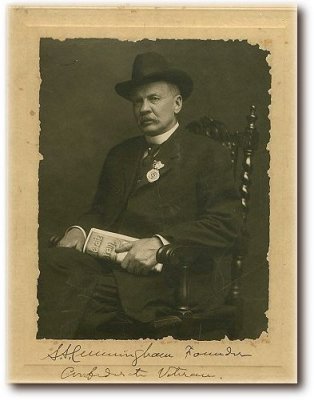 Sumner A. Cunningham  1843 ~ 1913
Sgt., Co "B", 41st Tennessee Infantry
A Hero of The Battle of Franklin
Founder, Editor, & Publisher of Confederate Veteran Magazine

The South was his passion," Dr. James I. Vance said of Cunningham, "and he loved it passionately with every fiber of his being."  The indomitable spirit of the editor to present the Confederate heritage in unmistakable terms led him to recognize the historical mission of his life's work, the Confederate Veteran .   While he was a man of no more than average intellect, the magazine he so zealously produced for twenty years is an irreplaceable document in Southern historiography.

Cunningham's influence is still apparent.  Distant relatives are accepted into organizations of Confederate descendants because of his participation in the Civil War.  Beginning in 1921, the UDC sponsored the Cunningham Memorial Scholarship at Peabody College in Nashville.   In the following decade, a syndicated radio broadcast, lauding the former editor, was heard throughout the South.   In more recent times, the Encyclopedia of the Civil War (1986) includes an entry describing the Veteran along with a photograph of its founder.   A complete bound set of the magazine is an expensive commodity among used and rare book dealers today.  But, perhaps the greatest testimonial to the enduring power of Cunningham's message was the rebirth of the Confederate Veteran in Murfreesboro in 1985, and shortly thereafter the creation of the Journal of Confederate History at Middle Tennessee State University, also in Murfreesboro.

S. A. Cunningham spoke loudly to thousands of common Southern men and women who survived and adapted to the most cataclysmic event of nineteenth -century America.   William Faulkner wrote with considerable feeling about Cunningham's generation in describing the lesson that all Southern men must come to grips with concerning their Confederate heritage.

"It's all now you see....  For every southern boy fourteen years old, not once but whenever he wants it, there is the instant when it's still not yet two o'clock on that July afternoon in 1863, the brigades are in position behind the rail fence, the guns are laid and ready in the woods and the furled flags are already loosened to break out and Pickett himself ... looking up the hill waiting for Longstreet to give the word and it's all in the balance, it hasn't happened yet, it hasn't even begun yet, it not only hasn't begun yet but there is still time for it not to begin against that position and ... yet it's going to begin, we all know that, we have come too far with too much at stake and that moment doesn't need even a fourteen-year-old boy to think This time. Maybe this time ."

"The Veteran has had faults and made mistakes all the while, but its motives and loyalty to the highest principles of life have never varied.  It has been courteous and heroic in vindication of truth, softened and strengthened by memories of the hundreds of thousands who went down to death with approving consciences.  By these sacred memories, which are as hopes for the future, let us all press onward... until even our enemies will be convinced that our motives were, and are exactly such as make the Christian tread through fire, in the faith that across the river we all may indeed "rest under the shade of the tree." ~~ S. A. Cunningham, 1895

"He sees now that all who are human are destined to death ere long, and he realizes more vividly than before that the human race is on trial every hour.  A Judge who cannot be deceived is in constant charge of his case, and he may be required to confess any day or hour.  Let us have faith and hope, giving good cheer; but let us place charity before all other virtues after integrity-charity that is kind and that endures.  Let us be active to help and elevate our fellow-man; then we shall have done what we could." ~~ S. A. Cunningham, 1908