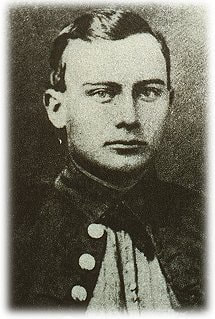 This week marks the 100th anniversary of the passing of Samuel Rush Watkins.  I suppose that most people have no idea who he is.  Sam Watkins?  Did he play in the major leagues?   Maybe for the Braves?  Was he the city manager back in the 60's?

It really does not matter if most people don't remember him because there are some people who will never forget him.   People who are interested in the Civil War almost invariably have his little book on their shelf.   They have read through it several times.   Their copies are thumb-worn and usually have lots of toothpick, coffee-stirrer, paper scrap, yarn or post-it note bookmarks denoting favorite passages.

Several years after the war Mr. Sam began to write his story for his children to read.   Someone showed it to the Herald editor and they began to run it as a serial.  Finally Mr. Sam bundled it all together and published it as a book.  He called it Company Aytch – A Side Show of the Big Show.  It was his memoir of service in Company H (Aytch – sound it out), First Tennessee Infantry that fought throughout the war.

His little book is just as remarkable for what it is not as for what it is.  In a day when writers delighted in painfully stilted writing styles and florid (often sappy) prose, Sam Watkins was plain spoken and direct.   He did occasionally include a few passages of torrid language but only as quotes from the chronically self-important.  Mr. Sam was a simple and uncomplicated man who wrote plainly and openly about the war.

There is no "snow-job" or "axe-grinding" within the pages of Company Aytch.  He wrote simply of his friends and their adventures.   He avoided discussions of tactics or grand strategy as he avoided lauding syrupy praise upon the "Big Bugs" as he called them.

In terms of the scope of the Civil War, Sam Watkins is a nobody and he delights in his low station.  He refers to himself as a "high private" and terms his comrades "Webfoots" for all the marching they did.  His book should be read aloud as it is written in a conversational style that has to be pure "Sam Watkins".

Mr. Sam's memoirs are funny sometimes and occasionally painful.  In speaking of the fighting he tried to describe the indescribable.  He reported on the battles that were fought by his unit and tried to convey a sense of the experience.   This is as close as he ever came to stilted language.

Company Aytch is in its umpteenth reprinting since he published the first 2,000 copies all those years ago.  No civil war student's education is complete without a thorough reading of it.  If you can manage to read the last few pages without a tear in your eye and a lump in your throat then you must have a very strong constitution.  It is as beautiful a passage as I know of in American literature.

They come every year.   They never fail to show up.   They come from all over the country and sometimes from overseas.  They are young and old, women and men.   They come looking for Mr. Sam's last resting place.  He lies in the lovely old Zion Churchyard next to his beloved wife Jenny.  When time permits, I try to take them myself.  It is interesting to observe people who are so moved by one slim volume of memories.

If you have not read Company Aytch it is way past time for you to enjoy the wonderful experience of fighting the war at Mr. Sam's side.  You will meet his friends, share his privations, thrill at his hair-breadth escapes, laugh at his shenanigans and share the overwhelming sadness of all that was lost during those terrible days.

Sam Watkins belongs to all of us here in Maury County.  He returned to Maury County at the end of the war to find the area devastated.  He rolled up his sleeves and, like others, worked to restore the area and his life.  He was an ordinary citizen who spoke with an extraordinary voice in the telling his story.

The years of privation and suffering both in the army and in the years of Reconstruction worked its evil upon his body.   He was crippled and prematurely old when he passed away on July 20, 1901.  Mr. Sam was only 62 years old and he knew well beforehand that he was dying.

It has now been an even hundred years since he passed on into eternity but as long as his little book occupies the shelves, hearts and minds of Americans, his memory shall be ever green.