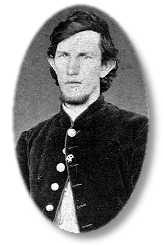 Thomas Fern Perkins, Jr. was eighteen years old when he entered service in June, 1861, and had just graduated from the Western Military Institute, at Nashville.   He was active in recruiting for an artillery company, of which Richard Green was chosen Captain and himself First Lieutenant.   Shortly after the organization of the company Capt. Green died, and the command evolved upon Lieut. Perkins.  It took conspicuous part in the first battle at Fort Donelson, losing eight men killed and fourteen wounded.  The men and guns were surrendered, with the other Confederate troops at Fort Donelson, but Capt. Perkins, after three days of imprisonment, made the first of his many escapes from captivity in the hands of the Unionists.  He then made his way back to his home in Williamson County (Tenn.), and lost no time in recruiting and organizing an independent cavalry company of sixty five men.

On the day after the organization of the company, in July, 1862, armed with eleven shotguns and about as many pistols, all old, this company, under command of Capt. Perkins, attacked a company of Federal cavalry of eighty men guarding a forage train of thirty wagons in the vicinity of Brentwood.   The wagons, loaded with corn and meat taken from the citizens of that neighborhood, were captured and eight of the enemy were killed, with another eighteen of the Federals were taken prisoner.   The captured wagons were burned and about one hundred and fifty mules were carried off.

A few days afterward Perkins' company, on the Charlotte Pike near Nashville and under the very noses of occupying Yankee Army, surrounded and captured a Federal picket post, killing two of the Federals and capturing seven.

Perkins' Company continued their successful pattern of hit-and-run raiding until one fateful night in December of 1863, when, on a recruiting expedition under orders from Gen. Joe Wheeler, Capt. Perkins was captured and incarcerated for fifteen days in the jail at Franklin.  He came very near being hanged by the Federal authorities on the charge of bush-whacking, being mistaken for another man of the same name.  Perkins was then sent on to the penitentiary at Nashville, where he was imprisoned about a week; from there was carried the military prison at Louisville, where he remained four weeks; and finally was ordered to Camp Chase, Ohio, as a prisoner of war.

While in transit, Perkins escaped during a stop-over at Seymour, Indiana, and made his way back to Louisville, where he was recaptured.   It was then that his captors chained him to a thirty-two pound ball and had him sent off to Camp Chase, where he remained two months.

From there he was taken to Fort Delaware, where he again made his escape through a network of guards, but was re-taken while trying to swim the bay with canteens tied about his body for bouys.  Shortly thereafter, Perkins was selected, with six hundred other Confederate officers, for retaliatory purposes and placed in front of Forts Gregg and Wagner, where all were exposed for forty eight days to the fire of the Confederate guns.  Once again he attempted his escape by trying to swim to shore with the aid of a life-preserver but drifted to a small island, where he remained for five days before being picked up in a famished condition.

In July, 1864, his captors sent him on to Fort Pulaski, at the mouth of the Savannah River.  While on the way he again attempted his escape by sawing a hole in the hull of the ship but was detected and taken from the ship and placed in the casemate of the fort, where he remained four weeks.

With two hundred others he was again chosen for retaliatory purposes, carried to Hilton Head and placed in close confinement. Perkins then proceeded to cut a hole with his pocket-knife through the floor of the cell and, along with Genl. Fowlk of North Carolina, made his escape, but was soon recaptured and returned.  Ever determined to gain his freedom, Perkins again escaped by putting on a Federal uniform but was once again recaptured.   It was at this point, no doubt angered and frustrated by his persistent attempts to take his leave of their "hospitality", that the Federals then placed Perkins in a log cell four feet square, where he was kept four weeks without bed-clothing or room to lie down.   Meager rations were passed to him through cracks in the enclosure.

Shortly thereafter Perkins and the ninety-six remaining prisoners of the original two hundred were sent to Fortress Monroe for exchange.  However, instead of being exchanged, he was carried on to Fort Delaware, where he remained till the 20th of June, 1865, when he was finally released from prison.   Returning to his old home in Williamson County, Thomas Fern Perkins, Jr. became a leading citizen of his community, one of the few places from which he never desired to escape.