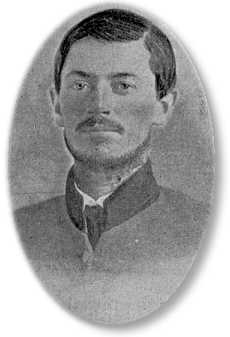 "For Now He Lives in Fame, Though Not in Life"

Pvt. Dee Jobe, who had just turned 24 in June, was near Nashville, probing for information, speeding it southward. With him had come Tom Joplin and other Coleman Scouts. They were operating around College Grove, Triune and Nolensville. Danger didn't matter. They knew what had happened to their fellow scout, Sam Davis.

Monday comes, Aug. 29. West of Atlanta, Sherman is tearing up 13 miles of the Montgomery line. In Chicago, the Democrats are nominating McClellan, with bright prospects of victory. A former Tennessee governor, William B. Campbell, addressed the Democrats assembled in that city, urging peace, amnesty for Southerners, restoration of rights and property. He blasted Gov. (Andrew) Johnson as a despot. Near Nolensville, the luck of Jobe is running out.

Between Nolensville and Triune, Jobe was in grave danger. He had an important message on his person and Yankees from Murfreesboro were scouting nearby.

The father of two Rebel soldiers had given Jobe breakfast. The house might be searched. Jobe hurried away on his horse. It is said that, as he rode on, a telescope lifted on a farm not far away. It searched the hills to the west. Did a Yankee see a horseman going along a fencerow, uphill, in a cornfield? Jobe had been spotted. Soon the horse was being tracked, perhaps as Jobe lay sleeping.

Did Jobe hear corn leaves rattling? Was that when he yanked out his message and tore it up? He started chewing and swallowing. Too late! The Yankees grabbed him - a patrol of 15 men, under the command of a sergeant of the 115th Ohio Regiment. They grabbed the scraps of paper. What remained could not be made out. The nearness of their miss must have been maddening.

They tied Jobe up. Now talk! What did the message say? Where'd you get It? What's your meeting place with other scouts, and when?

Jobe didn't talk. They put a bridle rein around his throat and hung him up a few times, then let him down. They knocked out some of his teeth with a pistol butt.

Bound and disarmed, helpless and bleeding, Jobe revealed nothing. They were dealing with a man in gray who held the welfare of the Confederacy above his life.

The torture went on. The Yanks were whooping now, yelling so loudly that they could be heard at a distant farmhouse.

They put out Jobe's eyes. Perhaps then it was that Jobe heaped epithets upon them. How much courage did it take to do what they did then? They cut out Jobe's tongue.

Enough? They're at him again. Tell, and we'll let you live. Did they want him to write out a few words? This, Jobe, is your last chance.

They're tieing something to a horse's tail. The reins, or a leather Strap? The other end - Jobe, it's about your throat. (Did you think for a moment of your friend Sam Davis, who was hanged . . . ? Ah, but they let him die in dignity, compared to this.) The horse is struck. It gallops away. Jobe's agony is ending.

Some of the Yanks, when they reached the Nolensville Road, had the grace to say that Jobe was the bravest man they'd ever seen.

A woman friend rode by, dismounted, and placed a handkerchief over Jobe's face, to keep off the hot August sun. Word of the crime was spreading.

For years afterwards, an aura of evil would seem to linger there, and passersby would shudder.


Many good men who passed the spot
Would think of Jobe and the deal he got,
Or cross themselves like nuns.

And say, on nights when the dark clouds toss,
Can you hear the clatter of a runnin' hoss?

Oh, Lawdy! What's the matter? But nobody talks.
The clatter stops and the ghost hoss walks.

Days hence, the news would reach DeWitt Smith, Jobe's cousin and friend, of the 45th Tennessee Regiment. They had been close companions and may have been namesakes. Smith's mind would become "unhinged' when he heard it. He would break away from Hood's army and "run up the black flag." That is, he would vow to take no prisoners; to kill every Yankee he met. Smith would come riding back into Middle Tennessee as the avenger. Many a Yankee, as many as 50 of them some said, would die in the night, his throat quietly slit with a butcher knife.

The August sun is sinking. A spring wagon is creaking through the shadows. Old Frank, the Negro slave who had tended Jobe as a child, is driving. His cheeks are wet as he lifts his young master's body, places it in the wagon, and heads back to the big log house where Jobe was born, June 4, 1840.

Today a roadside marker speaks of Jobe, on U. S. Highway 31A in Williamson County between Triune and Nolensville:

"DeWitt Smith Jobe, a member of Coleman's Scouts, CSA, was captured in a cornfield about 1 1/2 miles west, Aug. 29, 1864, by a patrol from the 115th Ohio Cavalry. Swallowing his dispatches, he was mutilated and tortured to make him reveal the contents. Refusing, he was dragged to death behind a galloping horse. He is buried in the family cemetery six miles northeast."

No granite shaft stands tall today to mark the spot of the Middle Tennessean who wouldn't be brain-washed. On a lonely little knoll he sleeps, where visitors seldom go, near the site where he was born. There is no inscription on the stone. The night of oblivion has almost closed in. Ask anyone, who was Dee Jobe? And the answer may be, "I don't know what you're talking about."

Epilogue
The preceding narrative was adapted from "The Civil War in Middle Tennessee" by Ed Huddleston. Originally published as a series of supplements to the "Nashville Banner" in 1965, the series was later assembled and published in book form. In the years that have passed since this was written, the resting place of Dee Jobe has come under the care of the William B. Bate Chapter of the MOS & B, and now receives perpetual care. The grave is located on private property - a farm a few miles off the Smyrna / Almaville Road exit of I-24, about 20 miles southeast of downtown Nashville. Some years ago, a Sam Davis Camp member and Real Son, Robert Herbert, whose father also rode with Coleman's Scouts, installed an appropriate marker at the grave.